This huge statue of Ho Chi Minh dominates its surroundings in the city that was renamed for him after the reunification of Vietnam in 1975. It is a spectacular setting with the People’s Committee Building as a backdrop. This beautiful building was originally the Hôtel de Ville de Saïgon and was built between 1902 and 1908. We found it interesting that the city is almost universally called Saigon despite the numerous memorials to Ho Chi Minh and the red flags (both the gold star and hammer and sickle versions) flying from every building. Indeed the bustling commercialism of Saigon is in stark contrast to the rhetoric of the Socialist Republic of Vietnam. We thoroughly enjoyed our four days in Saigon amidst the heat, noise and manic traffic consisting mostly of small motorcycles whose riders take scant notice of red lights! It is a charming mix of beautiful colonial buildings, peaceful tree-lined courtyards, overcrowded sidewalks, food stalls and markets, temples and pagodas. And we ate the most delicious food.

We’re in Hyderabad. Yesterday we took a private tour, which meant a friendly, well-informed tour guide with impeccable English, a driver so good-looking he belongs in a Bollywood movie and an air-conditioned car. The photo above is of the clock tower in the beautiful Chowmahalla Palace built in the 18th and 19th centuries by the nizams, a Muslim dynasty that ruled the area from 1724. They were fabulously wealthy mostly due to the diamond trade. We also went to the impressive ruins of the Golconda Fort that date from the 16th century, when it was developed by the Qutb Shahs on the commanding site that had been used for at least three centuries before that. From there we went to view the magnificent domed tombs of the Qutb Shahs. Seven of the eight rulers from that dynasty are buried here. As impressive as all these sites were, perhaps more interesting were the glimpses of daily life in the old city that we got while driving through the narrow streets clogged with traffic (mostly motorcycles, tuk-tuks and overcrowded buses), pedestrians, flocks of goats and other animals (cows, dogs and even a horse). It is chaotic and there are no discernible traffic rules, but it is certainly not dull! 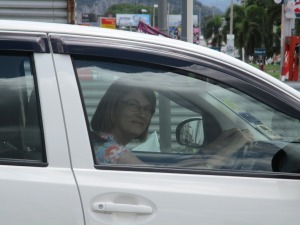 It seems that almost every time I venture out into Ipoh I have some kind of adventure, mostly of the “heart in the mouth” type. After days spent indoors because of the haze, I went out at lunch time today to meet Jim and a colleague. They kindly invited me to join them for a delicious (though calorific!) lunch of chapati, biryani and dal. I parked my car at a row of shops that I am familiar with and they picked me up on their way to the restaurant. After lunch I suggested they drop me at the side of the road to save them some time. What I hadn’t realised was that a deep drain separated me from my car. I looked to the right for a place to cross and saw a dead dog. It couldn’t have been there very long because I hadn’t smelt it. I immediately veered to the left and found a rickety ramp across the drain. Driving back towards the golf resort I had to negotiate some road works that have closed down one side of the road. This means the traffic on my side of the road has to take over one of the lanes going the other way. This can be tricky because there are no cones or barriers dividing the two streams of traffic. One has to rely on everyone else’s good sense. The driver speeding up behind me didn’t possess any such thing. Impatient with the slow traffic in front of him, he swung over into the far lane and drove down the wrong side of the road at breakneck speed. Fortunately the only vehicle coming the other way was a motorcycle that hurriedly took evasive action. I will need some down time before I venture out again!

I find driving in Ipoh challenging because of the general disregard for red lights, lane markings and right of way displayed by many motorists. Motorcyclists are completely cavalier regarding the rules of the road, probably because if you knock a rider off her/his bike, it’s always your fault, even if they’ve come through a red light straight at you! However, the way people decorate their cars provides some light relief. There are hundreds, if not thousands, of little Malaysian-made cars on the roads of Ipoh, many with their back ledges richly decorated with cushions, soft toys, fake flowers and religious paraphernalia. One of the favourites is a row of brightly coloured synthetic strawberry cushions, which you can buy from any number of stalls in the Cameron Highlands where actual strawberries are grown. Alternatively you can have a worm (as in the pic above) which takes up most of the ledge. I too drive a Myvi but its ledge is disappointingly free of decoration!

I now have a little white Malaysian Myvi (see pic) in the carport. It means that theoretically I can go wherever I like around Ipoh and further afield. However, so far, I’ve only driven to the supermarket. Why so unadventurous? One reason is the traffic here – lots of it, particularly scooter riders, who come at you from all directions. For many families, scooters are their only means of transport, so you often see whole families on one scooter – Mum and Dad seated with the baby between them and the toddler standing up in front of Dad just behind the handle-bars. I am terrified of knocking into one of these and being responsible for injuring a child. I’ve decided that the best time for going out is the middle of the morning, when most people are already at work and schools have begun. The other reason for my reticence about driving is my lack of familiarity with the layout of Ipoh. That is getting better with time and I guess getting lost is one of the ways I will learn my way round. I promise that I will get better at this so that, by the time you come on a visit, I will be a competent and entertaining tour guide!