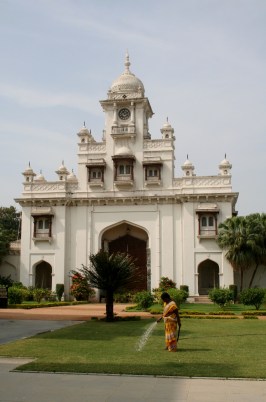 We’re in Hyderabad. Yesterday we took a private tour, which meant a friendly, well-informed tour guide with impeccable English, a driver so good-looking he belongs in a Bollywood movie and an air-conditioned car. The photo above is of the clock tower in the beautiful Chowmahalla Palace built in the 18th and 19th centuries by the nizams, a Muslim dynasty that ruled the area from 1724. They were fabulously wealthy mostly due to the diamond trade. We also went to the impressive ruins of the Golconda Fort that date from the 16th century, when it was developed by the Qutb Shahs on the commanding site that had been used for at least three centuries before that. From there we went to view the magnificent domed tombs of the Qutb Shahs. Seven of the eight rulers from that dynasty are buried here. As impressive as all these sites were, perhaps more interesting were the glimpses of daily life in the old city that we got while driving through the narrow streets clogged with traffic (mostly motorcycles, tuk-tuks and overcrowded buses), pedestrians, flocks of goats and other animals (cows, dogs and even a horse). It is chaotic and there are no discernible traffic rules, but it is certainly not dull!