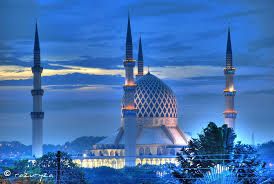 This is the largest mosque in Malaysia and the second largest mosque in the world. It is named after the late Sultan who commissioned the mosque when he declared Shah Alam, where the mosque is situated, as the capital of Selangor. It was built between 1982 and 1988. I visited this impressive building yesterday and was given an enveloping cape and head scarf to wear. A charming volunteer took me around and explained the history of the mosque and the significance of some of its features. All the marble used for the expansive floors was locally sourced – they gleam and are very warm under your bare feet. There are high windows of coloured glass that catch the light and intricately carved wooden panels. But the most impressive sight is the huge dome, which is more than 50 metres in diameter. There were very few men praying in the mosque while we were there but it has a capacity of 24000 and is much busier on Friday afternoons. We were staying in Shah Alam because one of Jim’s offices is nearby. My guide was surprised to learn that we lived in Ipoh and even more surprised that we had stayed in the nearby Grand Blue Wave Hotel (is that not a marvellous name!). Clearly these are things that Westerners don’t often do but I am glad we did.