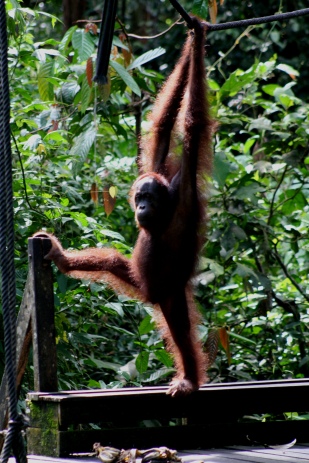 This is what orangutan means in Malaysia and Indonesia, two countries that have territory in Borneo, which is the habitat for this endangered species. In the photo above, the orangutan is a female – young woman of the forest! Before we left South East Asia, we were lucky enough to take a trip to Sepilok where we saw quite a few orangutans in the rehabilitation centre, which covers 10 acres of rain forest. Here orphaned baby orangutans that have been rescued from logging sites, plantations, illegal hunters or being kept as pets are trained to survive in the wild and then released. They are mesmerising to watch as they feed from platforms piled with fruit because they are so acrobatic. It’s as if they’re putting on a show – swinging from branches and ropes to pick up a banana or two, which they peel using their hands or feet. They are so appealing that it’s easy to forget that they are wild animals. Sadly their numbers are dwindling rapidly due to habitat loss – they are hunted by farmers who see them as a threat to their crops, particularly those who grow palms for oil.